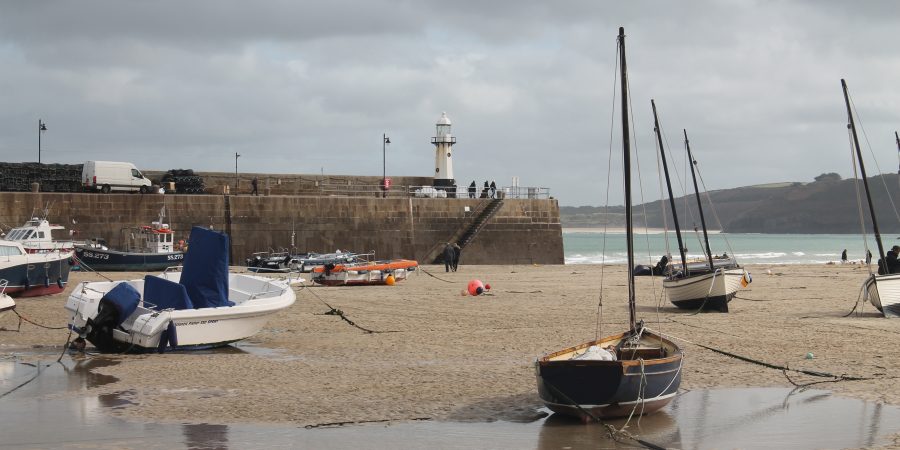 “We’re here now,” Aaron muttered; glum, dejected, the coast of the postcard-ready town of St Ives spread before us, just like our holiday. “Don’t sound too happy about it,” I said. Or something similar. Whilst suppressing the bubbling urge to tell him off. Or at least roll my eyes.

“It’s just,” Aaron explained, not for the first time in the past few years, “Now we’re finally here, the holiday is basically over, isn’t it? We may as well just go home.” A pause. “I hate holiday.”

“Aaron, it’s day one; we literally just got here and we have three days left. Why are you thinking like this?” Silence. “Let’s go and unpack.”

“What’s the point? We’ll have to repack everything soon.”

We travelled five or so hours west on Sunday morning, as I performed a good couple of renditions of Cliff Richards’ ‘Summer Holiday’, originally subbing ‘Summer’ for ‘October’, until Aaron insisted we change the track. If you’re interested, here are my top ten highlights from the Drive to St Ives playlist:

We were an hour away from our destination when something dawned on me, and I groaned. It was October and it was Sunday and we were staying for only the start of the week, “What if restaurants aren’t open on a Sunday, Monday, Tuesday? What if St Ives isn’t open?”

As we entered St Ives and clusters of its locals and tourists meandered into the roads without fear of my little blue car (that forced us into first gear whenever we approached one of Cornwall’s many hills), we soon realised we had nothing to worry about.*

*Beyond wearing a mask 99% of the time because St Ives is home to narrow streets and a lot of people.

We didn’t set off to St Ives with a plan and nor did we ever create one. Once we’d woken up on Monday morning, fingers crossed that we’d been spared of a terrible Rattler hangover, we set off into St Ives. We spent the day walking across each local beach, the tide out, allowing us to trudge along the wet sand, admiring dogs and even seals! We walked up relentless hills, having to pause and perch on a bench a couple of times, but found some pretty special spots to stop and admire the view. We spent the afternoon sat by the harbour, dog watching with a pasty in hand, before dipping in and out of shops dotted along the high street.

The next morning, determined to retrace Monday’s sandy footsteps, I set out for a 5k run. The slowest, hilliest 5k I have probably ever run. But the most beautiful run where my trainers sunk a little into morning sand and I experienced wind, rain and stillness, though never all three things at the same point in the same run. I even stopped to admire a seal floating in the harbour, as St Ives woke up, the streets the quietest I’d seen them in the last day or so.

Over the course of the next couple of days, we visited some ‘less touristy’ beaches which pretty much blew me away; and not just because the winds were quite something. We visited:

The food scene is epic, if a little expensive. As in, once we arrived home, we logged onto our internet banking with one eye shut whilst whispering a prayer to the money gods. Even so, I’d say it was worth every last penny.

On the first night we visited The Harbour St Ives, for a bottle of wine (maybe the catalyst for the lingering feeling of nausea the next day), cod for Aaron and scallop & prawn tacos for me. Aaron dubbed it ‘the best fish and chips I’ve ever had’. For our second night in St Ives, Aaron went for a solo wander as I had a quick (thanks to the Picpoul the night before) afternoon nap and he stumbled across Porthgwidden Beach Cafe, a restaurant on the beach that, if I squinted as I ate halloumi fries to start and fish pie for my main and let my eyes rest on the crashing waves outside, I could imagine we were in Greece. “But we aren’t,” Aaron frowned when I said the same thing to him. On our final night, after booking two days in advance (because every other night was fully booked!), we visited one of our favourite drink spots, only this time for dinner; The Rum & Crab Shack. Here, we feasted on calamari and their two taco options; pulled pork and crab. When asked if we wanted to double up on these for £2, our eyes widened and we, of course, said yes.

Now, let’s talk pasties. I expected to come away from St Ives as a person who, if cut open, you’d find a steak pasty in place of my heart. As we drove down to Cornwall on Sunday morning, we spoke incessantly about how many pasties we endeavoured to gobble. In reality, we only had two and therefore can’t, in good faith, add ‘Pasty SME’ to our CVs. But even so, the two I did opt for were a traditional pasty from St Ives Pasty (pictured above) and a chicken, chorizo and bacon pasty from Cornish Pasty Shop. Whilst I’m normally a stickler for tradition, my favourite of the two was the latter.

On Tuesday, we had one aim. To have a cream tea… and do it the Devon way – cream and then jam; see above! We set off on a short journey to Penzance and just happened to stumble across The Orangery Cafe, where we sat outside with warm, soft and crumbly scones, far too much clotted cream (my favourite way to cream tea) and, of course, jam.

There’s a hustle and bustle in St Ives that I wasn’t expecting. It’s impossible to deny its tourism; clearly everyone had the same early autumn holiday idea that we had, but I really loved the real ‘holiday’ vibe it has going on. Whilst this came with its worries in a time where I don’t want to be surrounded by too many people, St Ives’ businesses, as expected, are very COVID-savvy. This meant nipping into a pub or nursing a beer outside was as relaxing as it would have been in 30-degree heat in Greece. Once we’d scanned a QR code, of course.

Although we probably barely scratched the surface when it comes to St Ives’ pub and bar offering, my favourite places to drink were:

Pour the following into a jug:

It is hard not to long for it to be last Sunday again, all packed up in my little C1, with only the images of online photos of St Ives in our heads. But I have my photos. And a bottle of Dead Man’s Fingers in the cupboard.