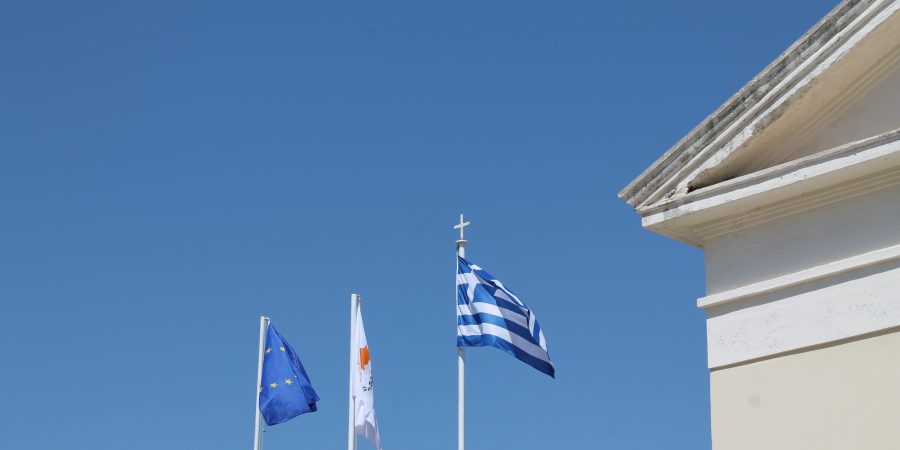 It’s now been just over a week since Aaron and I arrived back from what we’ve dubbed as our favourite summer holiday yet. We visited the awesome Paphos, a city that sits on the southwest coast of Cyprus. The city of meze, rocky seas and KEO (the local beer that we loved so much we both bought t-shirts with the logo on). Other than our holiday to Malta a few years ago, I’ve only ever summer-holidayed to Spanish islands. I’ve loved visiting Lanzarote and Mallorca multiple times but was excited to get on a plane and go a little further afield for a week of sunshine (and cocktails). Although this holiday was a little less busy than our usual holidays, we had a nice mix of relaxing and exploring the city of Paphos. Here is a little online scrapbook of our dreamy week away and the food and drink we loved.

Aaron and I did more than our fair share of eating in Cyprus. Being big foodies, we like to go half-board and seek out our lunches and dinners everyday. If you’re heading to Paphos anytime soon or considering it for your holiday destination next year, it is the BEST place for food. We stayed at Pyramos hotel (which was not only ideal, but a really good hotel with lovely staff) where we ate a simple but more than did-the-job continental breakfast of croissants, hams, cheese and Greek yogurt before heading out into our day. We mostly ate dinner in the surrounding area and, while we genuinely loved every single meal, I’ve narrowed them all down to my four (because I couldn’t pick three!) favourite restaurants (and therefore meals) below (alongside some links that may be helpful if you’re heading to Paphos in the future):

Eating dinner in Paphos every night was really exciting for me. I loved picking out restaurants alongside Aaron, trying as much calamari and halloumi as we possibly could, while dipping into the Cpriot/Greek culture with every meal. We loved meze and Greek food so much that we went out to a Turkish/Greek restaurant the day we went home! Safe to say we will be becoming regulars there.

As Aaron and I met in a Spoons (where all great romances start), we are partial to visiting quite a few bars… a night when on holiday. Granted, this year, I learnt my lesson after the very first night. One sore head later, I was a little more reserved for the rest of the week. But I was never too far away from a large KEO. If you’re heading to Paphos some time in the future and like your beer, cocktails or wine, Paphos has plenty (dare I say it, too much) to offer at those lovely holiday prices we all love. And also those holiday measures too! Here are my top three drinking spots from our trip to Paphos!

From cocktails to beer to wine, Aaron and I tried some really nice drinks when we were in Cyprus. We’ve thankfully discovered that many local supermarkets in the UK sell KEO which is an absolute game-changer.

If you’re heading to Cyprus any time in the future I really recommend all of these places, especially the restaurants. I had some really epic meals while in Paphos and was delighted to try lots of different food while also getting to eat my favourites.