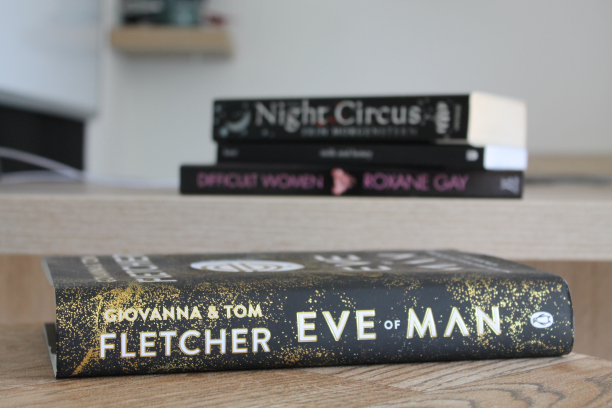 Last week I finished my sixteenth book of the year, Eve of Man by Giovanna and Tom Fletcher. As a New Year’s Resolution, I decided to try and read fifty-two books this year. At eleven books behind schedule, I am definitely the underdog, but feel free to take a look at what I’m reading now over on my Goodreads account. Being a fan of McFly and Giovanna’s fiction, Eve of Man was always going to feature on my challenge this year. Husband and wife Tom and Giovanna Fletcher have released the first part of their dystopian trilogy and here’s what I thought.

One day only boys were born. It’s put down to coincidence but when the next day and the days that follow see only boys coming into the world, the world is no longer as we knew it. As time goes on, every pregnant woman is closely monitored, the world hoping to find a scan to reveal a baby girl. After fifty years of waiting, Eve is born. The world celebrates. She quite literally is the world’s last hope. So when she is sixteen, she is to choose one of three men, selected especially to be Eve’s partner. She’s been raised in what can only be described as paradise. But will Eve see through the cracks?

Like every great dystopian novel, Eve is torn between two choices. Normally we, as readers, are torn with her, between two love interests. Only in this tale, Eve is torn between her “duty” and Bram, the boy who has grown up beside her. The boy she doesn’t exactly know and yet whole-heartedly knows. I think what’s interesting about Eve of Man is that, as a reader, we’re quite certain of the right answer, even if we too are a little in the dark about the secrets that lie within Eve’s bubble of comfort.

With such an interesting storyline comes a lot of politics. We’re immersed in a world that’s so dissimilar to our own and yet not entirely unbelievable. We read about a bunch of people that claim a right to Eve’s body, her choices and her life. It’s a book set in the future and, while we readers live in a world that is trying so hard to progress, we read about another world that is regressing quite obviously and rapidly. Eve of Man, like every gripping dystopian novel, presents a Good Vs Evil story and we so nail-bitingly hang on, hoping for Good to triumph.

Eve is a headstrong yet vulnerable young woman who is no doubt important to this dystopian world. Nonetheless I will be purchasing the second book (when it’s written and published!) with an “I <3 Eve” t-shirt on and the hope she will triumph. I am, of course, head-over-fiction in love with Bram. I think it’s super interesting that Eve is written by Giovanna and Bram by Tom. Both characters bring us different views of the world they’re living in and, together, the characters help us, as readers, to understand how we want the trilogy to end.

Eve of Man has made me want to order every dystopian novel on Amazon, quit my job and stay inside while I get through them all. Giovanna and Tom Fletcher have written a sensational first instalment to a trilogy I am super invested in. Eve of Man is the kind of book that you can almost visualise in your head as a film. If you’re into dystopian and if you’re not, pick up and devour this awesome book.

I rate Eve of Man by Tom and Giovanna Fletcher as 5/5!