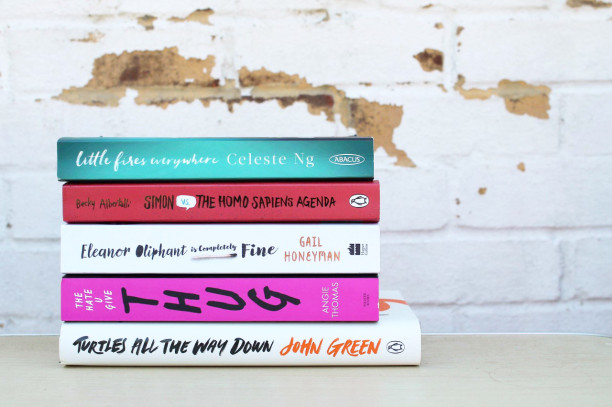 Despite being massively behind on my Goodreads challenge, I have read mostly awesome books this year. Although I’m evidently not the best reader in 2018, I’m definitely the best book-picker (and I do say so myself). I’ve been following lots of people’s Goodreads journeys via Instagram, Goodreads and just by catching up with family and friends. There are a handful of books that I repeatedly tell these readers to pick up this year. And because I think it would be a shame for these particular reads to not feature on your 2018 Goodreads challenge, I thought I’d share them on the blog today.

This is my most recent read and one I forced my mum into reading on her holiday last week. It’s about mothers and their daughters, seemingly flawless suburbs and the politics within them. If work didn’t keep interfering I would have happily read this in a day. It’s the kind of book you need if you’re in a reading slump and after a dramatic and pretty stunning read. Since everyone is talking about it anyway, you may as well make sure it’s part of your Goodreads challenge this year.

Simon vs. the Homo Sapiens Agenda by Becky Albertalli

Simon vs. the Homo Sapiens Agenda is a high school romance with the kind of brilliant subtext we expect from a young adult book. Simon is gay but only his anonymous email friend, Blue, knows. While he struggles to reveal this part of his identity, we become more and more intrigued, like him, to find out who Blue really is. If you’re a “read the book before the film” kind of human, get this one under your belt before checking out the equally as brilliant film, Love, Simon.

Oh, look, yet another unsurprising book on the list. But for good reason. Eleanor Oliphant is Completely Fine has taken the bookish world by storm. It’s about an initially unlikable character, Eleanor Oliphant and her isolated and confined life. This book is as endearing as it is revolutionary (a bold statement I’d happily shout from the rooftops). It’s on everyone and their cat’s Goodread’s challenge so why not add it as a “want to read” and get down to business too.

The Hate U Give by Angie Thomas

THUG has been no stranger to the bookshop’s main displays and will soon be plastered in bus stop displays and on the sides of taxis as the film is being released later this year. THUG is a poignant, devastating and needed tale about Starr and her witnessing her childhood black friend being shot by a white officer. In my twenty-two years I’ve seen and maybe even easily shrugged off questionable media portrayals of similar events. THUG presents the voice that’s been ignored historically and it has to be a voice you listen to soon rather than later. I’m very glad I picked up this book.

Turtles all the Way Down by John Green

As one of the first books I read this year, it’s amazing it’s stuck with me as firmly as it has. But Green has written another good’n. We follow protagonist Aza and her narrative that’s driven by her OCD. We fall in love with her adventures and friendships as we learn more and more about the intrusive thoughts that filter through Aza’s mind. Quite frankly, it’ll never do any harm to ensure your Goodreads challenge has a sprinkle of Mr. Green.

While I don’t think any of these suggestions are controversial, I rated them all five stars and I ardently fangirl about each and every one of them. Have you read any books this year that should feature in my Goodreads challenge?

P.S. I’m currently reading Eve of Man by Tom and Giovanna Fletcher and, although I didn’t want to cheat and include it on this list as I’ve not yet finished the book, I can already tell it’s a five star-er and one I’ll be recommending it all year long!