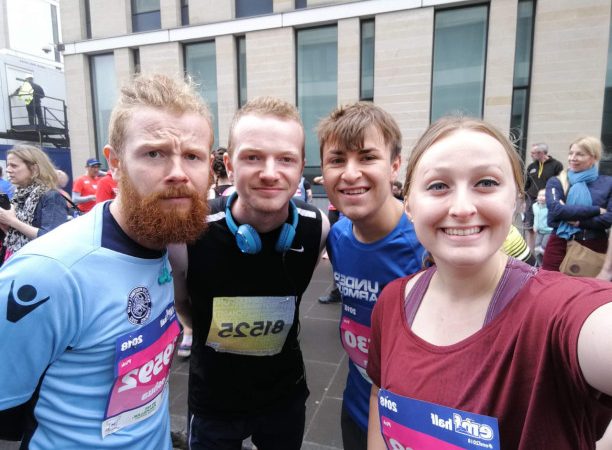 On Sunday I ran the Edinburgh Half Marathon and achieved a bright blue t-shirt, an Edinburgh skyline medal and an entirely frustrating personal best. More on that later, though. Aaron and I headed to the city centre at 7am (for an 8am start?!?!). We joined our pink wave, alongside our friend Jacob and his brother, Josh. I hadn’t run a half marathon since I ran the Cardiff Half Marathon a year and a half ago. I had, however, trained sufficiently and I only felt excited by the music that begun the race as the four of us walked to the start line. I had my eyes on a sub 02:00:00 PB and I was going to give it my best shot. Rocky, eat your heart out.

Mile 2: They told me this route was going to be a fast one and, after exploring the city of a million hills the day before, I can confirm I hadn’t believed them… until now.

Mile 3: Weeeeeeee, hills EVERYWHERE. I could do this all day.

Mile 7: What shall I eat after this? Do they do some kind of haggis roast dinner here?

Mile 8: Okay, where have the downhill slopes gone?

Mile 9: Eugh, people are running in the other directions. They look so happy they’re running in that direction and not in this direction. I hope it’s not too long until I’m in that smug wave of runners.

Mile 10: Hm. Where is the u-turn? Are they part of this race? Maybe they’re a different race and I just continue running this stretch and they do their stretch. Please tell me, I don’t have to run this distance back again.

Mile 11: Oh my gosh, I’m in the smug group of runners. Yippeeeee! Now time to grin at the miserable runners on the other side. Mwaha.

Edinburgh stays true to its slogan. It’s a very fast route; it was really over in the blink of an eye. The route was partly downhill, mostly flat with only a couple of hills that made me want to throw a tantrum. I was pretty spurred on by the speed of my miles flashing up on my Strava recording. I managed to stay under nine minute miles for the first six miles and that alone was my biggest cheerleader. It’s a very calm route and it helped me get my half marathon personal best. 02:00:10. Eleven seconds away from getting the PB I’ve been after for a few years now.

But that’s okay. I’m going to sign up for a half marathon in the next half a year. Sub two hours, ready or not, here I come. As for the others, they smashed it. It was all of their first shots at a half marathon and I was super pleased Aaron crossed the line to the sound of 01:44:45. We certainly deserved the mini pub crawl we went on that evening.