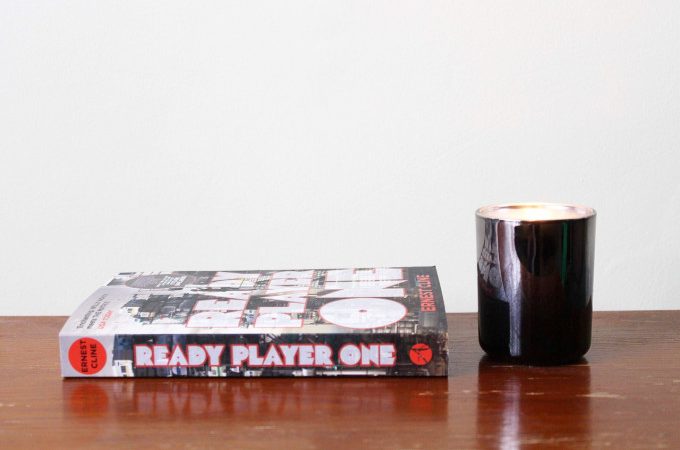 I have, AT LONG LAST, finished the thirteenth book of this year. I’m attempting to read fifty-two books this year and am documenting it over on my, recently, quiet Goodreads account. I am so grateful to finally have added a book to my online library. Although it took a month to read, I am grateful to have finally finished the brilliant Ready Player One by Ernest Cline. I’ve been buying a book from a bookshop each month and this was March’s edition to that collection. At long last, here is the thirteenth book review of the year.

It’s 2044 and we’ve destroyed the world. While there is no oil and poverty is visible around every corner, there is the OASIS; a free virtual world for all to use. Here you can quite literally be anyone you want to be. Everything changes when founder of the Oasis, James Halliday, dies. Prior to his death he created a contest whereby players must solve his clues that will lead to an Easter egg. Serious players, or, rather, gunters, must have an extensive knowledge of Halliday’s favourite games, films, books, music─you name it!─to even stand a chance of finding that Easter egg. The Easter egg that will provide the winner with, not only the control of the OASIS, but Halliday’s big fortune. In Ready Player One, we follow Wade Watts’ quest to find the Easter egg.

Ready Player One is exactly what you want out of a dystopian novel. The contest births The Sixers; a group of contenders who want to find the egg first and charge those who want to use the OASIS. With their underhand tactics and relentless cheating, they are hated by all gunters. There’s nothing more dystopian than a force far stronger than the characters we are rooting for. Alongside the evil of The Sixers, there’s the conflict between friends competing against one another, the revenge our protagonist wishes to seek and that uneasy feeling that the world we are a part of for a few hundred pages feels somewhat realistic.

Halliday was an introverted character; someone who found happiness in video games and films. Although a lot of the references were lost on me, it’s hard not to enjoy the geeky quotes and nostalgia that’s sprinkled over every page. Halliday’s contest brings Wade together with other gunters who are as dedicated as he is. They, like him, however, have secret identities on the OASIS which add that extra “dystopian” feel to Ready Player One.

I adored Ready Player One. It’s Black Mirror meets The Hunger Games and, I don’t know about you, but we need more books like that. Now to watch the film!

I rate Ready Player One by Ernest Cline as 4/5!