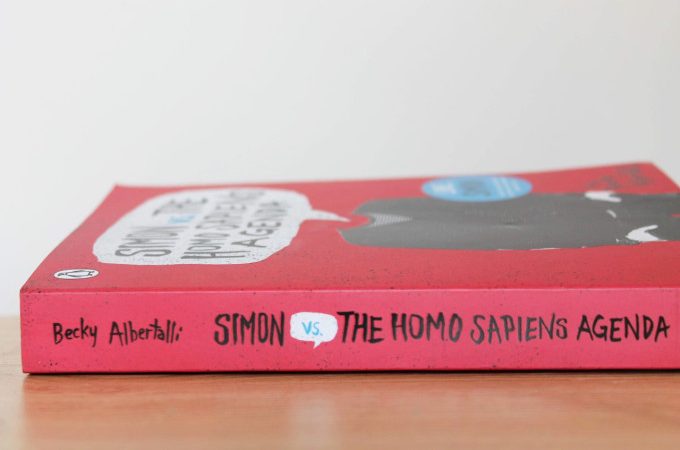 Today I finished the eleventh book of the year; with teary eyes and that “WHY DOES THIS BOOK HAVE TO END” feeling in my heart. I’ve officially got three joint favourite books of the year so far; The Hate U Give, Eleanor Oliphant is Completely Fine and now, Simon vs. The Homo Sapiens Agenda by Becky Albertalli. With the film coming out in the UK in just a couple of weeks (Love, Simon) and my challenge to read fifty-two books this year (which you can follow over on my Goodreads account), I knew this popular young adult novel had to be next.

Simon vs. The Homo Sapiens Agenda follows American teen, Simon. He’s gay but no one knows. No one other than “Blue.” And Simon doesn’t even know who Blue is. They talk via email, both with pseudonyms and cryptic email addresses. Simon does know, however, that Blue goes to his school and he’s desperate to know who he is. Blue isn’t ready to come out and Simon isn’t even sure he is. And then Martin, a popular geek, sees his emails and uses them to blackmail Simon into helping him win one of Simon’s best friend’s, Abby. I knew from the outset that this was going to be an all-time favourite book.

This epic love story was started and finished within a few days; it’s got every element of a teen romance novel that I love. AND it’s got diversity. Five stars all round (literally). It’s books such as Simon vs. The Homo Sapiens Agenda that reinforce the importance of young adult fiction. Albertalli, much like popular YA authors, John Green, Rainbow Rowell and Angie Thomas, write LBGTQ+, mental health and race driven novels that fight to keep conversation going. It, of course, shouldn’t be surprising to read a novel narrated by a gay teen, but it’s vital that authors keep giving segregated groups a voice.

My favourite aspect of this novel was that, while Simon’s sexuality and coming out is the main part of the narrative, that’s not all there is to it. Because that’s not all that’s in a gay person’s life. Simon has wonderful friends, a loving family and school projects to be getting on with. Albertalli, in this way, highlights that a person’s sexuality is never the whole of their identity; nor is it their whole life. It’s an important aspect and one that demands respect but it’s never the entirety of a person. I adored Simon’s friendships, his family dynamics and reading about the putting together of the school musical.

I did predict who Blue was; I was disappointed that I did. It made me flick through the book even quicker, eagerly awaiting some kind of climax. Simon vs. The Homo Sapiens Agenda is, in every sense of the word, charming. It’s funny, sad in places and incredibly heart-warming. I cannot wait to see the film and sob my heart out. I do encourage you pick up the book before you see the film; I’m pretty certain it would have been a tragedy had I not.

I rate Simon vs. The Homo Sapiens Agenda by Becky Albertalli as 5/5!