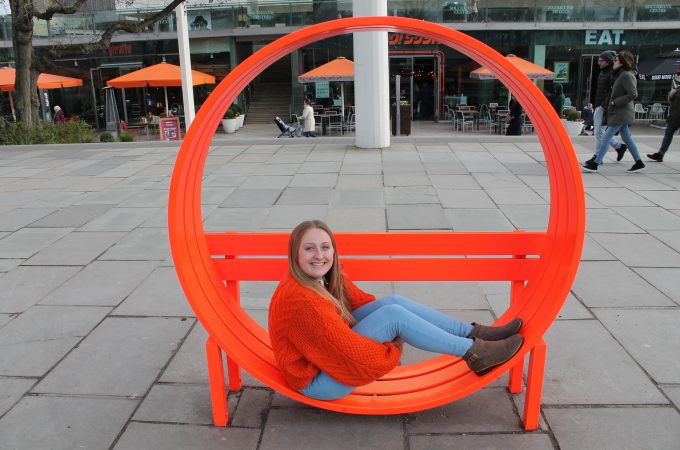 Whenever I visit London there is normally one of two reasons for the trip; to see someone (a friend/my brother) or to go to see a show (the theatre/a gig). While I adore both of these pastimes, London has far more to offer than just this (Who’d have thunk, eh?). Earlier this week I visited London for a two-day break and  just the right amount of saliva-inducing food. Although the steak, cheeseboard, fish and chips and quesadillas were part of why I’d rate the trip ten out of ten, the places we went to make up the bulk of my five star rating. Here are four alternative things you can do while in London!

Flight Club is a bar that has “reinvented darts for the twenty first century.” Aaron heard about this multiplayer dart bar that scores a little similarly to how bowling screens score and looks like a carousel (What more could a girl want?); he then booked it in advance because it’s known to get packed. We had the best time testing out the different games they have to offer with a pint or two. We ordered drinks from our own little booth (or “oche,” as their website informs me) and cried over the pictures their machines took of us- Flight Club; why is your camera angle so unflattering? At least that’s what I’m blaming my horrendous picture on. The staff were super accommodating and helpful, explaining any games we didn’t understand the rules of. As it was quiet we were also given an extra free thirty minutes which was SUPER lovely and unexpected. I think I’ll probably aim to go to Flight Club most times I visit London from now on.

For Christmas I bought Aaron a trip to Victoria’s Vagabond to take part in their “Trade Secrets” wine tasting session. Vagabond host many different wine tasting events and I adored our time there, tasting white, red and even orange─who knew?!─wine. The premise of our session was that our guide would teach us how to find cheap but brilliant wine. Our guide was absolutely excellent; he was passionate about the wines we were tasting and interested in our thoughts (of which Aaron had many). We were also presented with a cheeseboard (I paid £35 for each of us so I’d say that’s awesome value!) which made us wine tasters very excited after quite a few tastes of wine. The venue had vending machine esque facilities whereby, upon popping some money onto a card, you could test out 25ml of LOTS of different wines. Following our guided event─and still able to finish off the bottles we’d tried alongside the others on the session─Aaron and I were let loose with our little vending machine card and tried a few really awesome wines. I even tried a wine that was £3.90 for 25ml (I think the wine consumed  possibly made that idiotic call) and it was de-licious. The whole evening was so much fun and I’m going to be keeping a close eye on the events they have coming up. I think it makes a fantastic present for anyone with a wine tooth.

Namco Funscape is a charming rough-around-the-edges arcade that sits on the River Thames, near The London Dungeon. So often Aaron and I wander aimlessly─but happily─around London, drinking beer and letting time pass us by until it’s time for the main event of our day. It was awesome to visit Namco Funscape where we played skittles, pool and messed around on the arcade games. Kids at heart, it’s naturally right up our street. We don’t do the super touristy London things (The London Eye/Madame Tussauds/The London Dungeon) and so Namco Funscape provided us with the cheap and easy kind of entertainment we were after.

Although going to the theatre in London isn’t unique, seeing Barnum and the Menier Chocolate Factory is. Not only is the venue so endearing, but so is the really intimate circus-like layout out of the theatre itself. We waited in what I’d describe as a German-inspired bar, lit with pontoon lights and decorated with posters and tokens of the story of Barnum. It’s only on for about a week longer but if it so happens you’re looking for a really different show to see in the next week, this is the one I recommend. Since Aaron fell head over heels in love with The Greatest Showman I bought him tickets to Barnum, the story of P.T. Barnum, his “humbugs” and his jaw-dropping shows. The cast are magical, the tricks are sensational and the atmosphere so unlike any other show I’ve seen before. Barnum is a really special story and experience to enter into.

London isn’t just landmarks, iconic photographs and Wicked (even though I LOVE Wicked). What have you done in London that’s a little more alternative to most tourists’ agendas?