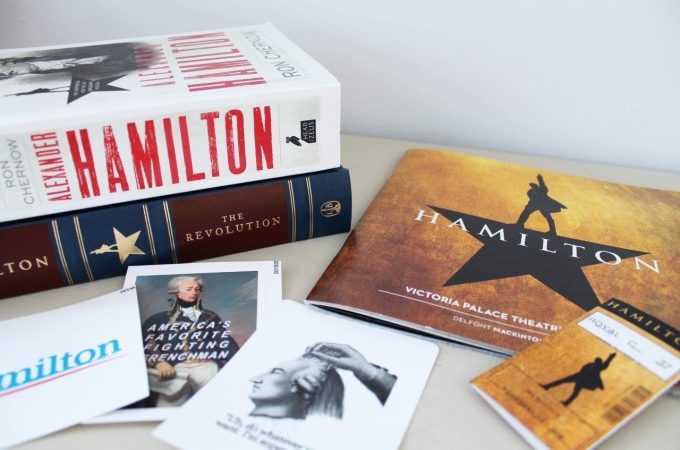 Over a year ago now, I listened to the Hamilton soundtrack and then I listened to it again. And so begun a love affair that lead me to naming Hamilton my favourite musical (and I love musicals) before I’d even got tickets to see it. Then, not too long ago, I received a message from my brother that simply read, “You’ve got Hamilton tickets.” Yesterday, after a short but intense love story between myself and the Hamilton soundtrack, I finally saw it performed in real life, at the Victoria Palace. As I sung the words in my head, and saw the soundtrack come to life with my eyes (that were the real-life representation of the heart-eye emoji), I clapped ardently, much like every other audience member that filled up the entirety of the theatre. I can safely say to the whole cast of Westend’s Hamilton and the geniuses behind it, that you blew us all away.

One of my biggest talents is my ability to latch onto something and talk about it repeatedly, until someone feels sorry for me and succumbs to my incessant pleads for them to sit down and listen to a particular album/watch my favourite film/read the new book I adore. Hamilton was one of these obsessions. After a long time, my brother listened to me and then listened to the soundtrack. Soon enough, I received a message telling me that he loved it. My boyfriend knows a lot of the words and I’m proud to say my best friend can rap some of Guns and Ships. What can I say? I’m a pusher.

Yesterday afternoon, though, I was surrounded by super-fans and naive audience members that didn’t realise that they were soon going to beome super-fans. I was in my element. I was delighted to find out that the wonderfully subversive musical, Hamilton, makes room for a less than traditional theatre crowd. Applause between songs was loud, but not louder than our cheers; poignant lines (for example, “Immigrants; we get the job done”) encouraged spontaneous “whoops” of solidarity; moments of complete light relief gave the audience a welcomed opportunity to finally, after twenty minutes of struggling not to sing the words aloud, sing a long.

Hamilton tells the story of a political Icarus; the Founding Father with a show-stopping rise and an almighty fall. Hamilton brings the history books alive with a mainly non-white cast, a hip-hop feel and a undeniable passion. The musical doesn’t remain frozen in history; and not just because many of the songs are rapped. There are political themes that are particularly relevant, even today. The modern audience take a seat, in a theatre that ignores the current climate for a couple of hours, and watches a musical that celebrates immigrants and that refuses to ignore the women’s narrative. Although shut off from the capital of England, we’re reminded of political and social issues that, centuries later, are still unsolved outside of the theatre doors.

Hamilton tells the story of Alexander Hamilton. We learn about his best friends, his enemies, his wife and his lovers. We admire his, perhaps naive passion at the start of the musical; we back the underdog, I think, from start to finish. But that doesn’t mean we whole-heartedly love him. We struggle with his mistakes and we see his unforgivable flaws. The “bastard, orphan, son of a whore and a Scotsman” leaves the Caribbean to prove himself; where he soon becomes George Washington’s right-hand man. Hamilton is non-stop and he’s admired and hated; but, throughout it all, he is always writing. As an audience member, we fall in love with his love story, we feel his wife’s heartbreak and we cry (or, at least, I did) for their heartbreak. The musical showcases another side of history; a funny side. Where we can laugh at historical figures and even laugh with them. Hamilton is the musical that teaches today’s generations some of the rich history of America; it’s a must see.

I adored seeing my definite favourite musical come to life. I saw some of my favourite songs performed in front of me and understood them on a level my hairbrush-singing couldn’t decipher. I listened to Burr’s narration with eager ears and clapped harder and harder as the songs went on. I wondered how I’d react to a cast that wasn’t the cast I got ready to in the mornings. But it was the cast helped me fall in love with Hamilton even more. Every actor took my breath away and, naturally, I must briefly talk James Westman. Westman filled Miranda’s shoes in the kind of way that meant he brought something new to the story, while delivering the Hamilton us theatre geeks adore. It felt like he was made for the part and I loved that he brought a sort of innocence to the role; I believe we really got to see how naive and young Hamilton was when he began his quest to greatness. The cast were spot on, the dancing was mesmerising and the acting was captivating; West End delivered.

Before I press “schedule” and listen to the soundtrack as I tidy up after my birthday weekend, I want to leave you with my top five songs from Hamilton (my subtle plea for you to give yourself a chance to fall in love with the greatest musical in the world too):

Hamilton was exactly what I wanted it to be. Thank you to my brother for the tickets!