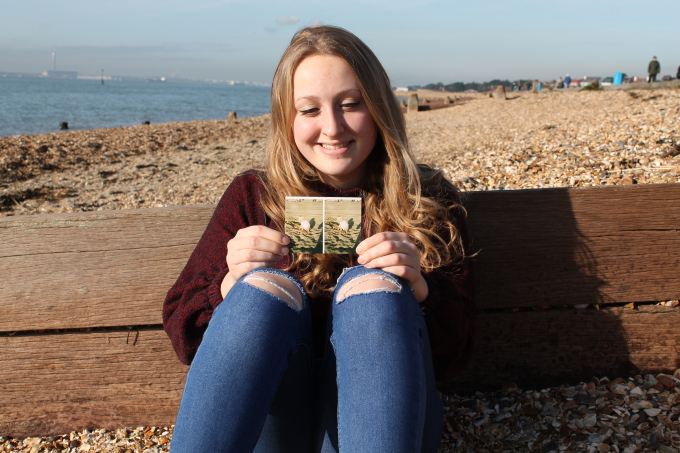 She straightened her curly-but-not-that-curly hair and blackened the lids and lashes that hugged her blue-but-not-that-blue eyes. She sipped on yellow fizz and scented her neck. She cringed at her pink cheeks and noted that she should later wish away the seemingly always present pigment upon making her eighteenth birthday wish. This particular ninth day of the second month unravelled quickly and, alas, she forgot to address her wish. With pink cheeks that sat above happy lips, something so trivial drowned in the chitter-chatter of loved ones and good friends. And, I note with nostalgia, brightly coloured drinks that were sipped through straws.

Soon she found herself to be eighteen years and one whole month. As she did at just eighteen, she changed her hair and highlighted her eyes; this time sipping on a bottle of cider and nursing the nerves in her stomach. Eighteen and, naturally, far older than she was one and a bit months before, she looked out of her window and onto the first night that would see her dancing. Momentarily, nostalgia inspired a longing for playgrounds and roller-skates and midnight feasts. She sipped the red bottled liquid and, instead, daydreamed about dance floors, high heels and a post-midnight snack stop on the way home.

It wasn’t long before she was singing with friends and telling them they looked magical. They took pictures to later remind them of the buzz in their giggles; the quickened heartbeat beneath their chests. Soon she was arriving into the night, friends on her arm and laughter in her heart.

She ordered a fizzy liquid and, upon turning around, caught his eyes in hers. His eyes that were coated in thick, long lashes. His eyes that looked away after a second, in fear of overstaying his welcome.

But it was Friday and if something new couldn’t start on a Friday, then when could it? His eyes returned to where her eyes never left.

She told him her name. He smiled at his new friend.

He told her his name. She smiled because she knew.

But the night was calling and so they linked arms, and hopped over cracks until they were safe from the evil breaking up the ground. She bought them both tiny bright blue, pink and green drinks. They said a chin-chin and swallowed the potion; nerves circling their stomachs, not like butterflies but like dragonflies. With big, eager eyes.

She danced and he danced; the dance floor’s music being their soundtrack. And only theirs. She laughed with her friends and he laughed with his; he bought her a coconut liquid and her cheeks gave her away as he held her hand. But it was dark and she hoped he didn’t notice.

But he did notice.

He noticed the pink on her cheeks that matched the nerves dampening his hands.

She twirled and she twirled and when she stopped twirling, she woke up on the twenty-first birthday of her so far short life. She and her mother and her brother and the boy with the thick lashes were soon arriving in the city of shops, beach and fish and chips. She wanted Time to stop as they ate tiny little dishes of delicious food that felt like magic on her tongue. Oh, how she could stay right here for all of time and be content. She willed Time to at least slow down as they battled the seafront wind with laughter before they drunk warm chocolatey drinks. She felt sorrow in her heart as her mother and her brother waved goodbye; Time always wins. Her sighs were heavy and her eyes felt a little like the sea beneath the pier. Her once chatty lips quietened.

“No fear,” he said with the mischievous grin that only she gets to see. “We’ve still got a whole evening ahead of us.”

The night’s sky was black-blue and stars winked at them; they all wanted to catch her attention to wish her the most charming birthday evening. But how could she notice? For while the stars were magnificent─that she could never deny─

How could she ever see anything when he was all the stars in the sky?

She sported a dress that wore much like the cosy blanket above that protected them from heartbreak and wickedness. Black and twinkly in all the right places. He slipped on his favourite shoes and offered his hand to the girl with the excited cheeks. After a dinner of laughter and food and a yellow-white cool liquid, the night snapped its fingers and they were wandering the streets of love, hope and peace.

“How about in here?” She smiled at his ardent desire to change how Time works and insist to the world that: Tonight doesn’t end when you say it does. It ends once we’re giggling so much that we cry; it ends once our feet are crying so much that they giggle.

He opened the door and she slipped into the room where her birthday would end with the happiest smile. Where Time would call last orders on their most brilliant night-time adventure and she would say, “Okay, Time. I hear you.” She ordered two orange-yellow drinks and they told stories quickly; as if Time would run out before they had the chance to tell each other everything inside of their heads. The music grew better and better as the modest yet show-stopping crowd grew more confident; dance moves got bigger and she couldn’t resist much longer.

A relaxed voice with a guitar filled the room and she just had to dance. She got up; I’m done with being polite. She motioned to him and he grinned, a little unsure. He followed and soon the whole room was in one place. Strangers sung to strangers and minutes before midnight took centre stage, the crowd sung a birthday song to the girl who was pink from the best feeling she had ever felt.

It’s nine o’clock on the ninth day of the second month. And that means only one thing. She’s woken up one year older and one year wiser and less at war with her rosy cheeks. Instead she sees the excitement smiling all over her face; How lucky was she to be so full of happiness that her whole being wanted to let the world know? She moves her vanity mirror closer and pulls a curl that quickly bounces back with enthusiasm. She squints at her eyes and says a silent thank you to them for being the telescope that show her her most favourite memories; her most favourite people.

She does sparkle up her eyelids and she does change the direction of her hair, but now, at twenty-two, simply because she wants to. She pulls out a small bag and retrieves a little tube of paint. She carefully colours in the smile beneath her nose with a colour that matches her happy pink cheeks.

I think it’s about time I start admitting I’m “in” my twenties. But it’s okay because my rosy red cheeks are one of the many things that make people think I’m eighteen at most! I have decided to celebrate turning twenty-two by launching this very blog. I’ve said a fond farewell to my old blog and am endeavouring to bring a little more of its content over to Kath Not Kat in the next couple of months. I’ll later be posting a birthday cocktail recipe for those who, like me, are feeling twenty-two but, in the mean time, I’ve got a lot of birthday food to get through!