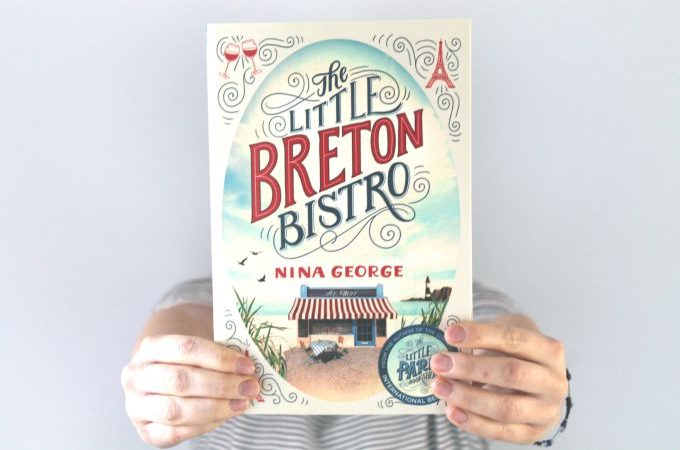 Today I finished The Little Breton Bistro, my fifth read of the year. Although this took me longer to read than the other books I’ve finished this month, I’m still ahead of schedule and, therefore, still very smug. I’ve rated the novel over on my Goodreads account but if you keep on reading you’ll see my rating below. I picked this book up as my monthly bookshop pick up (I want to buy at least one book a month from a bookshop) after my eyes were drawn to the very French cover, the wonderful typography and the author who I’ve read a little of before (more on this later in the year for I want restart her book The Little Paris Bookshop which I, for no good reason, never finished).

The Little Breton Bistro follows the very lost German, Marianne. She wants to end her life and escape her controlling marriage. After leaping off of Pont Neuf, a passerby pulls her out of the water and, when recovering in hospital, despite not feeling grateful for the stranger’s actions, Marianne falls in love with a painting of Brittany. She gives herself one final adventure and finds herself falling in love with the real life Brittany too. She is accidentally becomes a chef at Ar Mor and she builds relationships with the locals of Kerdruc.

George’s writing is so wonderfully and beautifully detailed that it’s like looking at a picture. I can imagine every tiny French detail; every splash of the waves; every part of the atmosphere that Marianne fell in love with. I felt like a bookish tourist; I’m very much in love with Brittany too, despite never having visited. Few writers have written words so magical that I feel like I need to plan a trip to Brittany… right away. I have read a lot of books set in France or with strong French connections recently and I definitely cannot complain. I wish Books Set in France was a genre for I would read EVERY book.

Maybe my favourite aspect about the novel was that George’s characters weren’t twenty to thirty years old. It shouldn’t be refreshing─it should be the norm that more books tell the story of older characters─but it really was refreshing to be told stories of characters of varying ages. The protagonist is sixty or years old and proves that we all have a story to tell. And, just maybe, life can really begin at sixty?

A minor issue I had with The Little Breton Bistro was that I struggled to keep up with the characters. There were so many that I think the number impacted how long it took for me to finish the book as I’d have to really think about who’s who. Though, admittedly, I do become unduly despondent when faced with lots of characters and, for this reason, I do take a fair amount of blame for this issue. Bad reader. I adored how the pace quickened in the last eighty pages of the novels; we seemed to catch up with all of the characters at once and, here, I was determined to keep up.

I did, however, definitely take issue with how George tackled suicide in this novel. While it’s brilliant to have another story on our bookshelves that explores suicide, it felt as though suicide wasn’t researched quite enough. While parts of this important area of the story were carried out excellently, other parts were quite disheartening. George didn’t explore the science behind our protagonist’s suicidal thoughts. I believe George presented the dangers of an abusive relationship extremely well but (PREPARE FOR MILD SPOILERS; TURN AWAY NOW IF NECESSARY) the rate that Marianne begun to feel okay seemed unrealistic and overly fictional. Once again, I must counteract my point. It’s amazing that George does portray that it does get better; she tells those struggling to hang in there and that’s really awesome. George─I’m sure, accidentally─created a narrative that shows a turnaround from attempted suicide to be simple. From my own research there’s likely not to be a quick fix but George does show that hanging in there is worth it.

This review has become incredibly long and so here are a few other reasons why I closed the book feeling very fulfilled by The Little Breton Bistro:

Despite parts of the novel leaving me a little conflicted, The Little Breton Bistro is a charming read. George’s characters are always dimensional and her writing is simply phenomenal. As January draws to a close and we greet another cold month, I think this book could bring you comfort much like a warm hot chocolate before bed. Have you read it? Let me know what you thought in the comments!

I rate The Little Breton Bistro by Nina George as 4/5!

“A book is both medic and medicine at once. It makes a diagnosis as well as offering therapy,” – Nina George.