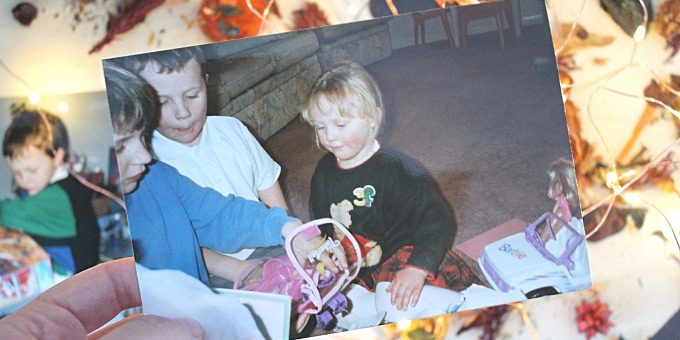 I have always adored your month. When you take centre stage a warmth can be felt at all times. Despite the cars that can’t see in the early hours of the morning. Despite the magic we breathe out as we wander outside for the first time each day. Despite the “brrr” that slips our lips as we get into work. Some of my fondest memories belong in the December scrapbook stored in my head. I flick and I flick and the memories don’t stop twinkling. On the twelfth day of December, I’ll remind you of a few.

Every year my mum begins our Christmas dinner by presenting each of us with a giftbag containing a little chocolate, a scratch card and something else. Once, for example, we each had a giftcard to use and were instructed to buy a certain gift for everyone. This particular year, my mum also gave us the most ridiculous game to play once we’d eaten as much turkey and roasted veg as we could muster. We were each given a windup reindeer toy to race. It created a lot of giggling and competitiveness and I thank you, December, for helping us make this memory.

2. Christmas crystals in my ears

I was a couple of months away from turning eleven when my wish finally came true. It was Christmas Eve and I was sat in a chair, ready to get my ears pierced. I remember the day poignantly. The whole day was novel as I tried to get used to the pretty blue crystals in my ears. We visited the pantomime afterwards and I distinctly remember feeling oh-so-grown up. Later on that evening, upon cleaning my ears for the first time, I fainted. I soon woke up to paramedics in my living room, still feeling just as excited about my newly pierced ears but also feeling very odd. December, nostalgia is a feeling I am good at feeling. Every year I remember the day I got my ears pierced as soon as December rolls around. This December is no exception.

3. A Christmas holiday of video games

A few years ago my brother and I took our tradition of bringing out the PS2 in December to a new level. Do you remember, December? “Far too old” to be entertaining such a tradition, we fell into a routine of playing our favourite game every day in the week that cheered on Christmas Day. “Shall we?” one of us would say mid-morning. Only a second would pass before the other agreed ardently. Star Wars Battlefront 2 was our greatest companion that Christmas holiday; though, we bring out the game every single year.

4. An evening of baking

December, you won’t have to think too far back to remember this one. My mum and I had one evening to bake not just one, not just two but three festive goodies. Mince pies. A yule log. Christmas cookies for Santa. With your encouragement and Christmas singing on the radio, we got the job done. It’s one of my all-time favourite memories.

5. Gnocchi with vodka lemonade and lime

Aaron and I celebrate your presence with a Christmas meal out in the week running up to Christmas. We choose somewhere really special to eat out and sparkle ourselves up. The first chapter of this new tradition rings a sleigh bell so I’ll recount that particular evening. We headed out into one of your clear and cold nights that you cast upon the south coast of England. We found ourselves in a particular Italian where I fell in love with gnocchi for the first time. The evening ended with a trip to a bar that no longer sits closely to Aaron’s home; I drunk vodka, lemonade and lime and didn’t really want the night to draw to a close.

Roast turkey, roast potatoes and honey-roasted veg. This memory can only mean one story; I’m sure you’ll remember. It was my final Christmas at university and friends gathered for Secret Santa, silly chatter and a delicious dinner. A glass of wine and a best friend started off the most festive evening. It finished with ridiculous dancing to ridiculous songs. I would relive that evening this very Christmas if I could.

Back when I was in junior school, my brother and I would get our Christmas presents for our family from a little Christmas evening our school held. One year, my brother and I decided we should show each other what we were giving each other when December 25th would wake up already. This memory has to make the cut because we felt so awful for doing it and definitely ruined some Christmas magic. Since then we’ve never dreamed of doing such a thing.

Nearly two years ago now I headed to the pub my boyfriend worked at to celebrate New Year’s. As he worked, I drank champagne with a few of my friends and it was one of those fizzy New Year’s that stands out from many others. It was a night of silly laughter and a “cheers all around.”

9. The final trip to the Hobbit

I always remember going to see The Hobbit: The Battle of the Five Armies when it’s nearly December’s main event. For three years in a row, my brother and I felt Christmas around us almost because of the Hobbit. The three-part story gave way to three films released in December for three years in a row. Every year my brother and excitedly went to see the films and, to this day, the films are somewhat a symbol of Christmas to me.

A couple of years ago I’d finished at university for Christmas and returned home for my brother and I to put up the tree. It was a stand out Christmas tree decorating session because I spent the evening dancing and singing as we decorated away; taking the stupidest selfies you’ve ever seen.

Last year, Aaron and I went on our final Cardiff Winter Wonderland trip. After two years of visiting the mini Christmas wonderland of twinkling lights, cutesy stalls and rides, I felt a little nostalgic knowing it was our last trip; at least for a long time. So, instead of simply walking around, we went on a super fast and silly ride. Aaron and I quite literally screamed as the ride went round and round; my usually indestructible eyeliner streamed down my face. We finished our festive evening with a crepe and a German beer in the little German pop up pub.

For the last three years I have been working in a shop in my local high street and, on the first Friday of your month, they host an evening in the name of your favourite event, Christmas. My little shop sits opposite the Christmas tree locals gather around; I work happily into the night as merry people dip in and out of the shop, nursing mulled wine and getting ready for the big switch on. I adore the evening and I bet you love watching it too, December. This year was a good one.

December, we all know you’re generous. Giving. And that’s how you like to be. May I selfishly ask that you keep giving me the best Christmas memories ever? December twelfth is the day where Christmastime really starts to feel like Christmastime and many panic about getting ready for parties and buying presents and the big day itself. I’m feeling pretty content this December twelfth but it is only nine in the morning. I’ll bid you farewell now but I can’t wait to see what the rest of your day brings. What the rest of your month brings, actually.

P.S. Just to add a bit of context: In December, over on my old blog, I “wrote letters” to December every day until Christmas Day.