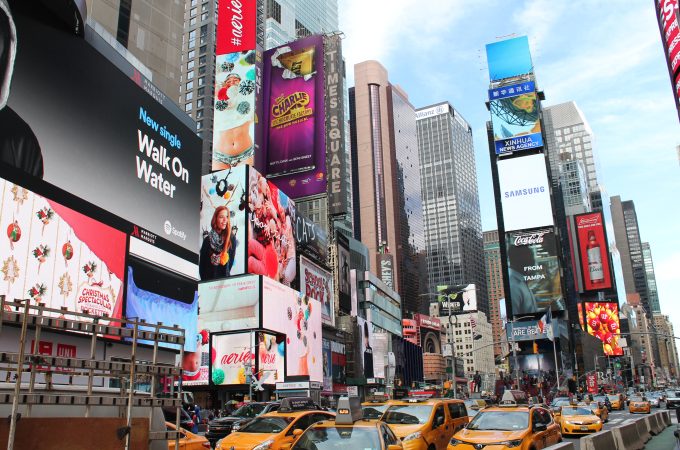 A Christmas Eve kind of feeling flooded through me as I woke up to the third day of our New York adventure. It was show day. We weren’t too sure what the whole of our day would entail but we headed to Times Square, the headquarters for day three. We immediately found a breakfast spot, full of different breakfast options. Tarryn opted for a doughnut whereas I enjoyed some pancakes and berries with crushed pistachios. Back into the hustle and bustle of Times Square we went and our day began.

We headed out into New York at 7am because we were under the impression Broadway tickets were sold from TKTS (a discounted theatre ticket business) from the crack of dawn. The times vary slightly but on a Friday, TKTS opens at 3pm. A little dramatic about our missed sleep in (I was a little dramatic about our missed sleep in) but excited nonetheless, we purchased a ticket for a City Sightseeing tour. Upon return from our bus tour we went on a ticket-finding adventure! More on that later!

We chose to stay on the tour bus for the whole trip- around about three hours long. We sat on the top of the bus, never ignoring the show-stopping New York around us. The tour was always informative and easy to stay engaged with. I took these few hours to not worry about snapping pictures and simply, instead, enjoy the ride. New York’s story is a captivating one and the three hours flew by.

A few favourite things I saw/things I learnt from/recommendations I loved from the tour:

Friday gifted us with the coldest day of our trip. With numb feet and chattering teeth we had a burrito from Chipotle (Tarryn’s favourite) before making our way to Junior’s, after our tour guide sung its cheesecake’s praises. And, man, it didn’t disappoint. We had a waiting time because it’s that popular but once we were sat down, I excitedly slurped on my hot chocolate and made a pathetic attempt at eating my strawberry cheesecake. Still too full from lunch, I watched Tarryn devour her chocolate cheesecake in a matter of minutes before taking mine away- which I popped in the fridge in our room and ate for breakfast the next day. In the UK we’re all about leftover pizza for breakfast but we are missing a trick. Leftover cheesecake breakfast for the win!

After spotting the theatre Hamilton shows in (I fangirled… a lot), we decided we would entertain a little retail therapy. We visited two shops (neither of us are big shoppers!) and I fell in love with them both. We spent nearly an hour in Old Navy, the coolest shop ever. I purchased a couple of things, although I popped back on our last day to grab some gifts and an NFL t-shirt for myself. Next stop: Sephora. And, to those of you who are interested, it is kind of magical. The busyness is a little off-putting, but it’s Sephora… what would you expect? Everything was so beautiful that I wanted to buy it all. In the end, however, I decided on a pack of Sephora lipsticks (a gift for myself and for others) and their Winter Magic eyeshadow palette to sparkle up my eyelids this winter.

We headed back to our hotel so we could theatre up for our evening. After dinner at T45 restaurant (a yummy macaroni cheese dinner each!), we made our way to Lyceum Theatre to watch the show we chose earlier in the day when we hopped off the bus tour. And what was that show? *Drum roll please.* The Play That Goes Wrong. Later on this evening I will be posting a review of the show because seeing a Broadway show was a big dream of mine; it was definitely a stand alone experience.

The final full day of our New York adventure will be posted tomorrow!

P.S. You can read about day one HERE and day two HERE! <3