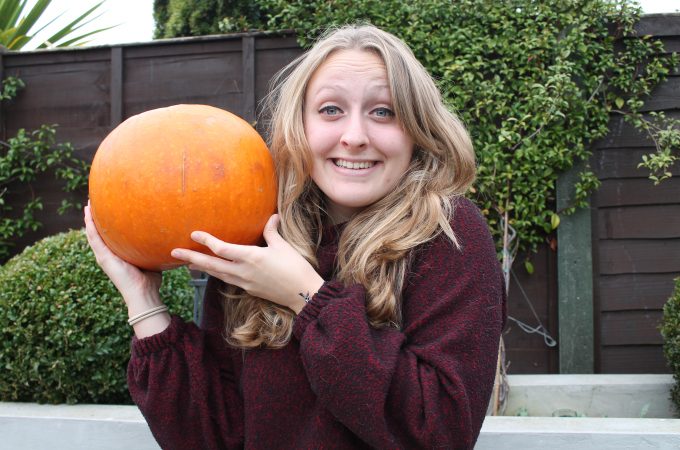 The start of my afternoon off on Thursday began optimistically. Aaron and I headed to Tesco and I felt rather festive. It took everything in me not to purchase every packet of trick or treat sweetie bags but instead focus on my pumpkin-picking. I am only a recent lover of Halloween; having begun to really adore it for the first time last year. I wanted to go pumpkin-picking this year but that pesky time thing got in the way. All the same, I was excited and childishly picked the biggest and most round pumpkin of them all from the supermarket. Aaron, the wiser one of the two of us, apparently, sensibly chose a small looking pumpkin. I felt a little twang of jealousy (it was adorable) but I stuck to my guns and cradled my impressive pumpkin. And so my afternoon of foolishness began.

After a  ridiculously long photoshoot with my pumpkin, the carving began. Before I write to you my legitimate five pumpkin-carving tips, I wish to share with you the list I jotted down on my phone as I continually messed up my pumpkin-carving. So here are five tips for those of you who suck at pumpkin-carving too:

Jokes aside, I did really enjoy the pumpkin-carving. So much so I secretly want to do another one before they’re off the shelves for another year. So here are five more tips:

After two years of pumpkin-carving, Aaron and I are drawing 1-1. So despite creating a rather silly looking Patrick the Pumpkin, I’ll be back. Next year I will be stepping up my pumpkin game, picking a smaller orange friend and spending more time on the actual carving rather than the spooning out of the insides because LARGE PUMPKINS MEAN STUPID AMOUNTS OF ORANGE GOO.

Are you going to be pumpkin carving this year? Have you already?