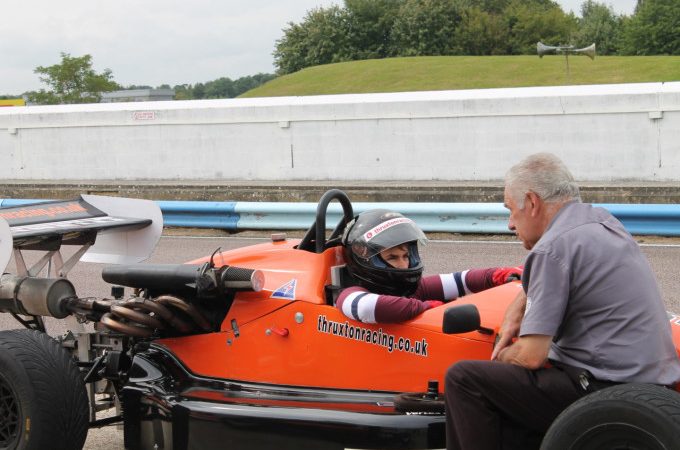 Aaron’s a manager at a Mediterranean restaurant. He loves calamari, his dog Bud and his new double bed that takes up his whole bedroom. You can find Aaron over on Instagram or somewhere on the South Coast doing something silly with his friend Jacob. He’s Binging on Beetroot’s first guest writer and has written about his fabulous day (I know because I was there, taking snaps and watching him fangirl about cars) at Thruxton race circuit below! Be sure to also check out the Thruxton website, their Twitter and their Instagram!

For my 21st birthday I was gifted with a Thruxton race car experience from my girlfriend’s brother, Jordan. And wow, what a experience it was! It was the 14th of August and the weather was thankfully good for me. Thruxton race circuit is just over an hour away from home so I had to leave quite early to be there for 9:30, but it was well worth waking up for.

After arriving I signed in and was told when my briefing was. I had time to wander around to see the surroundings before the fun began. The briefing lasted about twenty minutes and it included a video of how to take on the corners- I had no clue what they were talking about and started to feel more nervous than I already was. Two questions were asked in the briefing; one being, “Who is nervous?” and one being, “Who is excited?” I think I was both but more nervous than anything. I wasn’t quite sure how I would manage with a totally different car; the clutch was my main worry. A week before my dad said, “It’s really easy to stall.” This was on my mind all week and throughout the briefing.

The briefing ended and I had a sticker on my chest with my name, the experience I was doing (Racing Car Driving Experience), what session I was in and what car number. I was session 1 and car 4 so I headed over pretty promptly.

The first car I got in was the Porsche Cayman. I got in, put on my seat belt and after a minute chat with the instructor, he said the words I was nervously waiting for: Off we go then. I thought, I’m not ready for this. But off I went and he navigated me out of the pits. This is when I knew this just has to be my next car (a boy can dream!). I went round the 1st lap of the track a little cautiously. I was more comfortable on the 2nd lap and was going pretty quickly. I didn’t really look at the speedometer much but, when I did, I was driving at 70mph in gear 3, so that gives you a idea of the power this car has. It was amazing and I loved the car. The driver was also very friendly which was nice and we were having a chat about this and that as I drove around the track at silly speeds.

Two laps were over and I was back in the pits getting out of the Porsche. I then headed over to the main part of the experience which was the race car (the car in all of the photos). The race car has 130 bhp which isn’t much compared to the Porsches 260bhp, however the 0-60mph in the race car is 4.5 seconds compared to 5.3 seconds in the Porsche.

I got on all my gear for the race car- my shoes, balaclava, gloves and helmet. My nerves had calmed down a little and I was feeling more excited than anything. I got in my race car- number 3. I had a briefing on how the car worked and how to drive it; the gear stick was very odd. It was simply a lever with no numbers on. He informed me of the gear numbers, how to turn the engine on, and how to overtake. It was very helpful and the man who did inform me made me feel more comfortable in what I was about to do. However I was on my own driving this power machine and that wasn’t going to change.

And I was off. I made sure I rode the clutch and put a lot of acceleration and I managed it. I was out of the pits and put my foot fully down. I knew the corners now and was cornering well until the last corner which I knew was the most difficult. I had to carry it out in a certain way. On the 1st lap I made sure that I had a lot of braking time so I was slower going round it but, as I did it this way, it meant I was in a good position for the following corner. Once I did it the 1st time, I came back round to it and was going much faster. I changed gear and heard the wheels squeaking but I got round it much faster and it was so much fun. I did get stuck behind some others though and had to overtake- which was the best feeling ever. There was also a limit to these cars; they maxed out at 8000rpm which I did hit a few times, and I felt the vibration through my whole body. This meant I was going at 100+ mph. The five laps went so fast and quite honestly I though I only did 3 until I was ushered into the pits.

Once I finished the laps in the race car I had one final thing to do- the fast lap, driven by someone else. This was one lap in a Skoda; yes, a Skoda! This is an affordable car which a race driver drove round the track. I got in the ‘best seat’ according to the driver- the middle of the back. Crikey, I was sliding all over the place. We skidded round the corners as I slid from left to right. The lap was amazing and the car was driven so well.

All in all the whole experience was phenomenal and I so want to do it again. That evening I had a huge urge to save up for a Porsche. I was considering the race car, but for practicality the Porsche might be the sensible option.