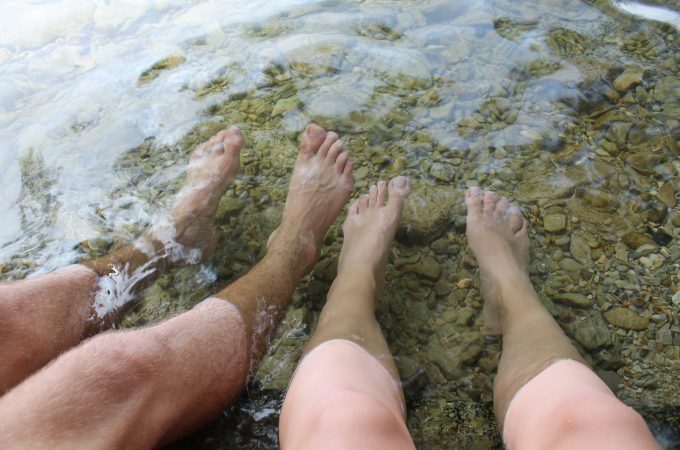 Last week I holidayed in the beautiful blue Port de Pollenca, located in northern Mallorca with a promenade of restaurants, bars and gift shops that overlook the lovely bay. I visited for seven days with my boyfriend and his family, as well as his sister’s boyfriend. I stayed there about seven years before and the walk along the promenade was just as charming in August’s warmth this year. I am normally clicking away on my camera while I am away but decided not to this time. Instead of posting a fair few posts, I have collated a scrapbook-like blog post with a few words here and there. While I am bringing it altogether, I will be nursing the old holiday blues. It was a good’n.

It was well known throughout the week that my dinner-choosing ability was spot on. I consistently chose the yummiest dishes and I’m not shy to admit it. While it hurts to rank them, here were my top three favourite meals that you just have to try when visiting Spain or its lovely islands (excluding tapas and paella because… duh):

The week was mostly very chilled; something I really adored about the holiday. City breaks are my favourite pastime and they are very fast paced; I wondered if a summer holiday would be a bit alien now. Swimming in the sea, playing too many card games and having a gin an tonic before we went out in the evening, however, was simply sublime. We tested out the ice cream (a quick top three of flavours: 1. yogurt with forest fruits, 2. pistachio, 3. white chocolate) most days and overloaded on Lay’s paprika crisps because, seriously why don’t we have them in the UK?!

However, we did hop on a bus or coach a few times and explore a little. At the beginning of the week, we visited Alcudia. The town is invitingly old, with lovely orange buildings and dainty restaurants. Aaron is partial (understatement of the century) to a market or two. After visiting the local market in the morning, we made the most of Alcudia’s huge market, gifting tourists with everything you want in a market: the tacky; the food; the clothes; (and most importantly for Aaron) the tea towels.

Aaron and I hopped on a short bus trip to Pollenca, the nearby town. While its history wove through its cobbled streets and we had the yummiest apple and goats cheese pizza (don’t knock it until you’ve tried it), we think we chose the wrong time to visit. We were informed the day before that it was home to a fiesta for the time being and the town was spookily ghostly while also a bit… drunk.

On our last full day we headed to Palma, the capital of the Spanish island. It was awesome. We booked a boat ride for an hour; aiming to cool down from the pretty intense heat. We nursed fizzy pop and beer, enjoying the breeze and blue water. We then slowly made our way to lunch: tapas. The best tapas of the trip and some of the best tapas dishes I’ve had ever. And trust me, I’m more than qualified to make such a claim. I was chief tapas-orderer and thus, have our order to hand:

Bellies full on the best kind of snacky lunch and a glass or two of sangria, we opted for a bit of retail therapy. Although it’s not my favourite holiday activity, I sunk my teeth right in, buying some new earrings and a top with a flamingo on (more than necessary). The city is more than endearing, offering tourists a bit of everything and even more.

One of my aims is to run in every place I visit; one morning, I slipped on my trainers and ran. I did aim to run once more but with all the swimming tiring me out (and, well, just being well and truly in the swing of holiday feels), I made do with the one lovely 5k run. One of my favourite parts of the whole holiday was the sea. Despite loving the beach, sand and water, before this holiday I’ve not made the most of dipping my feet in the sand and swimming through the I-need-to-cool-down water. Chilling in the sea was really quite fab. As well as a BBQ on the balcony at lunch time, a game of volleyball in the sea and an hour on a pedalo, the seven days in Mallorca were awesome.

We actually stayed in an apartment above a restaurant (Simbad- where I had the most delicious swordfish; the place is a Port de Pollenca must!) which is something I’ve never done. It’s now something I’d like to do again. It meant easily catering for ourselves and waking up just a minute away from the beach. I had a lovely time and have already reached the stage of holiday blues that see the Holiday Hungover Human eagerly searching for flights for the next trip away to sunshine. A girl can dream, eh?