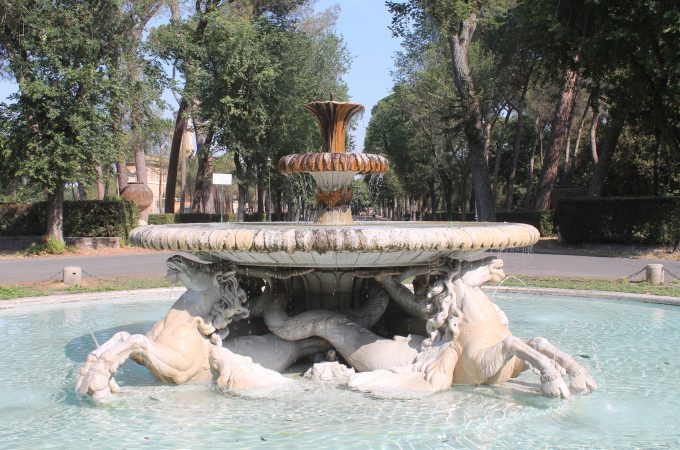 Saturday opened its eyes without a struggle. A heavy and well-deserved sleep ensured this. Fuelled by our busy itinerary, my brother and I got ready and headed to a local cafe for the hotel’s complimentary breakfast. After an awesome day one in Rome, we were eager to get our feet back on the dusty pavement. An hour or two more of getting to know the city ensured that I was well and truly in love- and I didn’t need rose-tinted glasses. Rome has its own beautiful filter even Instagram couldn’t replicate.

Villa Borghese gardens greeted us early Saturday morning; unassuming and modest. A few runners and dog-walkers joined us; it was, otherwise, very quiet. Although the grass was tired and parts far from groomed, my brother and I were charmed. So much so that we returned. Visiting parks are my favourite parts of breaks away- in Cardiff, I lived minutes a way from two of my favourite places which happened to be two humble and stunning parks. As much as I’d like to ramble on for ever, I will be doing so in a few days- dedicating a whole post to maybe my favourite place in Rome. If you visit the city, you must see it. It’s really something.

One of the few attractions in Rome that felt overwhelmingly busy was the next stop: the Spanish Steps. With the Trinita dei Monti church overlooking the steps and excited tourists, the Spanish steps are grand but simple. Busy but lovely. Despite having to avoid constant attempts at being sold roses, it’s definitely worth a visit. I’m hoping to read up more on the history as soon as possible, alongside other monuments and places my brother and I wished we knew more about.

We stopped off at the Trevi Fountain for a second visit; wanting to snap a better picture and admire its undeniable beauty, once again. It’s definitely in my top five favourite gems of Rome, even if it’s, for sure, the most uncomfortable place in Rome. If I visit again (which I hope to), I will make sure to wake up super early to catch its glory in the sunrise and without the crowds. Next, we headed to Pizza in Trevi after drooling at the slices of pizza tourists grinned at the day before. While we both adored our slice, we were a little foolish. They gesture at how much you want, asking if that’s the right size. Each of us agreed to their generous gesture, before it got weighed and we paid around about 17 euros for lunch- although we were given enough to save for later, which was great for a long walk back to the hotel.

Altare della Patria is a monument which was built for Victor Emmanuel. It’s huge and white and incredibly beautiful. My brother and I marvelled at its structure and the view it provided. Round the corner from the coliseum and the perfect headquarters for some busy photos of the brilliance of Italian buildings, the monument is something else. After taking a few snaps and feeling incredibly fatigued with the 36 degree heat coupled with a lot of steps, my brother and I walked a little to seek refuge in a little restaurant. I had two halves of Peroni (something I was particularly excited about- and, my gosh, it didn’t disappoint) and we continued our Uno championship while laughing at the copious amounts of sweat hugging our faces and arms.

My brother and I both picked a spinach and ricotta stuffed ravioli with tomato-y sauce for dinner before heading to the River Tiber to an Aperol Spritz bar (it was as orange as it sounds but lovely all the same), picking the seats that gave us the best view for plenty of photo opportunities. The river is beyond dreamy; I could stare into its majestic reflections for a few hours and feel content. But how did we dwindle away the hours, you ask (you didn’t ask but I’m going to tell you)… Uno.

I was delighted that we bumped into a half marathon on our walk back. I forced my brother to spectate with me, telling him it’s my version of his love for planes. I was astonished at the fitness of these runners. It started at 9pm (presumably because daytime heat is just too much) but it was still 30 degrees. I clapped and grinned at my favourite sport and decided that I have to return for the city and for the event. We arrived back and checked our step count- over 40,000 steps were stepped. It must have been the amazing amount of white and bright steps Rome offers. Although my feet were willing me to stop, exploring my new favourite city by foot is something I could never regret. Even if my blisters are saying, “Told you so!” now we’re home.