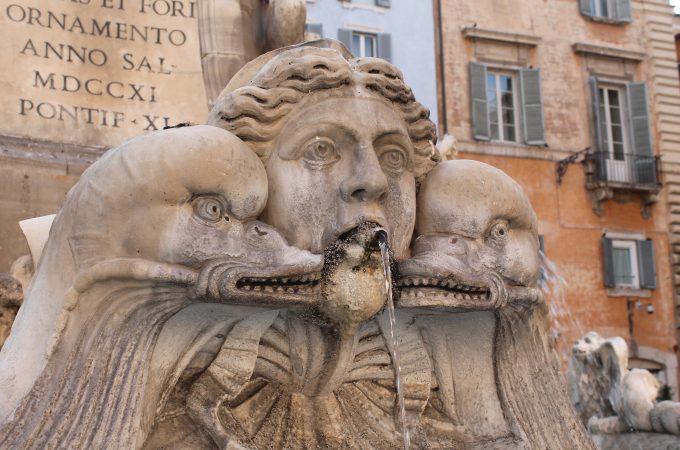 While London rested for a few more hours until the final day of work for a week was complete, my brother and I awoke and beat the newspapers to the racks outside of the shops. Friday 16th: 4am wake up. Time for Rome. I travelled to London the previous evening, silver rucksack packed; purple suitcase by my side. After dinner in the city and a short yet not so sweet sleep, we sleepily made our way to Stansted Airport Friday morning. My brother and I began our first city break adventure (hopefully of many!) in the ridiculously cool city of Rome.

After a childhood of holidays beginning with my brother, curly-haired and eager-eyed at the sight of planes (he would purchase a model of the plane we’d travelled on- this trip was no exception), not much had changed. Well, except one thing. Jordan is on his way to getting his pilot’s licence and, at the airport, his eyes were wider than ever; his head in the clouds. He explained to me a couple of different types of planes and complimented pilots’ landings; once aboard, he peeked into the cockpit excitedly, claimed the pilots were the coolest people in the world before filming the take off. Just over two hours later, and a few games into our Uno Championship (we decided we would play as many as many games as possible and tally the score- I won mwaha!), we landed in the capital of Italy after playing eye spy as we pointed out parts of Italy from up above.

After a 45 minute coach journey, we’d arrived, sweaty Brits facing over 30 degree heat the UK doesn’t often see. Following a quick freshen up, we aimed for one certainty: gelato. A walk away from our hotel was the centre of the hustle and bustle, and ice cream greeted us, teasing us behind glass. I picked two flavours I can only pick as the perfect pair: pistachio and white chocolate. Without our mum to tell us not to spoil our dinner, we checked out the Trevi Fountain and the surrounding area, licking our ice cream happily, despite knowing we were also looking out for someone to have dinner. (In the film Remember Me, Ally eats dessert first because what if she were to die before the sweet stuff and she never got to have her favourite food? I like this philosophy a lot.)

We decided to go to Osteria Dell Allora, choosing bruschetta for starter, Jordan choosing four cheese gnocchi for main and me choosing my absolute favourite pasta dish: seafood (calamari, muscles and something delicious I couldn’t quite discern) pasta. It set us up perfectly for a further wander, admiring the glistening white buildings and the evening heat that felt glorious on our summer-shy skin. We noted how quiet the city felt; a complete juxtaposition to my brother’s city, London. Although we weren’t sure why. We became architecture’s number one fans, while deciding we were qualified to analyse the fountains and their unique characters. We marvelled at the Pantheon and were amazed at how many beautiful buildings and famous Italian wonders we’d already seen. We even managed to get a first glimpse at the beautiful River Tiber.

Although we headed out into Rome mid-afternoon and headed back in time for a ten and a half hour sleep (we are not big sleepers- we were astonished), we felt like we walked lots, saw lots and ate plenty of Italian food for one evening. Here are a few tips on how to get the most out of less than half a day on a city break:

After our first few hours in Rome, my brother and I were super excited to began day two, plan and sun cream at the ready. This trip was a unbelievably generous 21st birthday present from my brother so thank you so much for that, bro!