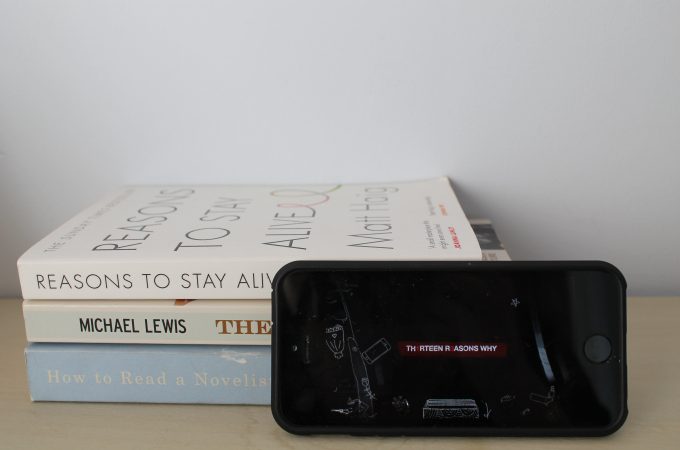 13 Reasons Why, the Netflix original has received a lot, a lot of attention. It tells the story of Hannah, who commits suicide and leaves behind 13 tapes, blaming 13 different people for her tragedy. Reasons to Stay Alive is a deservedly well-respected book where we learn of Matt Haig’s struggles with depression, while he lists reasons to keep going. The former of these two pieces of art that represent suicide – a subject that needs to be dealt with delicately but poignantly – is a revenge plot; the latter is a potential relief and help to those suffering; also a brilliant source for those who have not had a direct experience with depression and want to understand. *Potential spoilers for 13 Reasons Why in this post.*

I binge watched 13 Reasons Why in three days. Despite the uneasy feeling in my stomach, I enjoyed it. It’s addictive. It has a lot of the traits a modern series needs to survive and become a staple I Must Watch for so many young people. I decided not to address my unease while watching the series and I believe, selfishly so. I think what I enjoyed about the show was the relationships we get so attached to in these teen shows. I fell for the tragic love story. I congratulated its addressing of important issues society has tabooed. I was able to watch in an upsettingly chilled out way (while so often feeling devastated and heartbroken for the story we were told) because I haven’t had any close contact with suicide. That, ladies and gentleman, is a kind of ignorance that is so damaging because it can overlook unsettling characteristics just for the sake of a bit of let’s-not-think-too-much escapism.

Reasons to Stay Alive by Matt Haig is a brilliantly important account of his experience that opened my willing-to-learn eyes to the hard truths of mental health and suicide. So many of us have and/or will experience mental health problems; I want to be as educated as possible about mental health so as to remove this awful stigma society has attached to it. I want to be of help to those around me suffering; I want to be clued up on how I can help- what I can suggest. I want others to not feel alone. As Matt Haig says, we so often jump to sympathise for those with physical illnesses. Mental illnesses, we can’t see. Ignorance likes to prevail and people choose to make ill-informed comments about what “really is” an illness. Now THAT is not an ignorance I (as no one should) have; and anything I do not understand, I want to.

So, why has someone who so ardently wants to help rid the world of its prejudices, lack of understanding and “shhh, keep quiet” nature fallen for a programme that made her feel super uneasy?

Like I’ve said, I was able to gain escapism from 13 Reasons Why, and in indulging in such a selfish practise I am only encouraging some of the really terrible things the show promotes. I think the difference between this show I watched with rose-tinted glasses on and one of the most eye-opening books I have ever read is, hope. While Reasons to Stay Alive by Matt Haig is an honest depiction of a person’s harrowing suffering but will to carry on even when it seems impossible, 13 Reasons Why can definitely be seen as another teen series that trivialises such a serious topic that needs to be addressed in a way that reaches all of us- not blind us with gossip and drama in order to allow some of us to forget about the scarily senseless portrayal of a suicide. Reasons to Stay Alive could just be a friend to those who feel alone; it could encourage them to seek help; it could let them feel hope. I don’t believe 13 Reasons Why can reach audiences in such a way.

While it definitely has its fans, 13 Reasons Why has sparked a massive discussion. In a lot of ways, this is a redeeming feature of the series; talk is GOOD. What I fear is that this insensitive portrayal terrifies other writers, artists or anyone to talk about suicide. To talk about this massively important taboo; to un-taboo it, once and for all. We can’t be scared to contribute to this discussion. Maybe – I’d hope, probably – 13 Reasons Why had good intentions. It does at least portray a story about suicide that has seen a reaction that talks about how we need to look out for everyone; to treat people well. It does BRING UP rape- another taboo culture fears talking about when if we did, we could bring about change.

The “but” with this show is a really, really big one. Not exclusively, but this show’s predominant audience are young people. Vulnerable young people; some feeling the darkness of mental health; some considering suicide. Many have picked up on its giant flaws- the lack of explanation behind the process behind considering and carrying out suicide; the fact the show doesn’t show the protagonist to seek much help, and when she does, she doesn’t get any; the fact the show is a romanticised revenge plot that leaves (although many characters did some terrible things to Hannah) behind blame. We need shows to encourage understanding about mental health and suicide and show how it is as much of an illness as others society so easily accepts; to encourage audiences to speak about our mental health and our problems; we need those who have suffered from loved ones attempting or committing suicide to not feel blame. I realised far, far too late, but 13 Reasons Why does not do these things, plus a multitude of others.

Since I am no professional; just someone who wants to understand, here are links to a just a few places that might help you if you are suffering, or wanting to help a loved one:

We all need to be as clued up as we possibly can be. We all need to talk. Read Matt Haig’s honest, brilliant, sometimes funny but always informative and helpful portrayal of his depression while you’re at it. It’s considered to be a comfort to those suffering and man, it struck many a chords with me. 13 Reasons Why is easy to “just” watch a show; without a critical mind-set on. But sometimes we need our critical thinking hats on and I believe 13 Reasons Why – if to be watched – requires this hat. If you really have to watch it, don’t fall for the characters and the way the show tells the drama as blindly as I believe I chose to. While 13 Reasons Why encourages us to treat people better, it doesn’t teach us to seek the help that is out there should we be suffering.